Retrofit or retrofitting consists of adapting a plant’s capacity to new operating and / or design conditions in scenarios where the current plant increasingly demands efficiency with lower costs.

Often the application of this procedure in a water, effluent or solid treatment plant may be more economically advantageous than its simple replacement or enlargement.

To carry out the retrofit process in ETE’s and ETA’s, H2O Engenharia evaluates the technical-economic viability of a re-design project through an analysis of the current plant and evaluates the available technologies for this adaptation to the new conditions. These services include:

– verification and evaluation of the mechanical and operational conditions of the equipment;

– the adequacy of each unit operation to the characteristics of water, effluent or solid waste;

– the hydraulic capacity and efficiency of the treatment and of each unit;

– verification and suitability of the civil structures of the tanks

– meeting the conditions of water abstraction and effluent disposal. 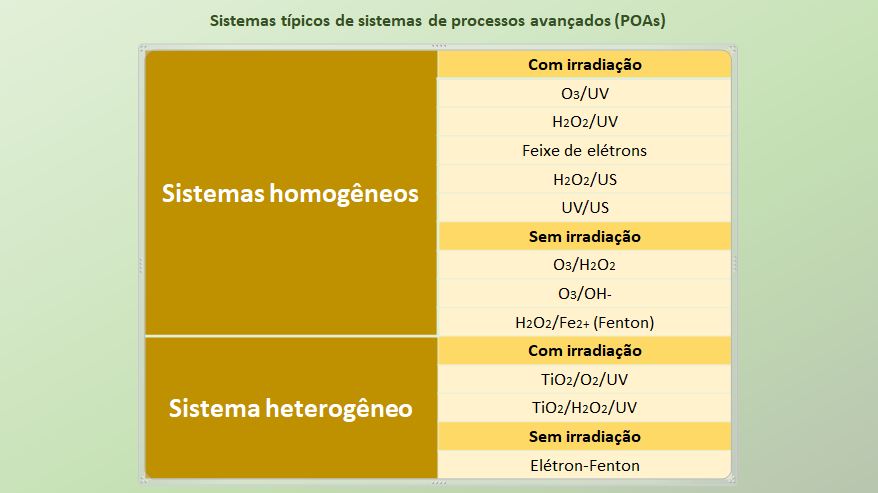 The acronym “POA’s” stands for “Advanced Oxidative Processes”. POA’s are systems based on the reaction between potent oxidants or between oxidants and metal catalysts, in some under the action of irradiation, which are dissociated to generate hydroxyl free radicals (● OH), highly oxidizing, unstable and non-selective substances that MINERALIZE A ORGANIC MATERIAL PRESENT IN THE SEWAGE TO CARBON DIOXIDE, WATER AND INORGANIC ICONS.

In addition to the removal of part of the organic matter, the POA’s can remove compounds such as phenols, chlorophenoids, alcohols, dyes, aromatics, among others, being an excellent alternative for the removal of several classes of compounds. The removal efficiencies of these compounds are difficult in biological systems.

Although it is known in the area of ​​environmental sanitation (soil remediation and water treatment), the use and diffusion of this type of technology is still small in Brazil. Companies have been struggling in recent years, together with universities, to diffuse it in the treatment of water and effluents.

The illustration shows the various types of POAs used in the effluent and water treatment system. 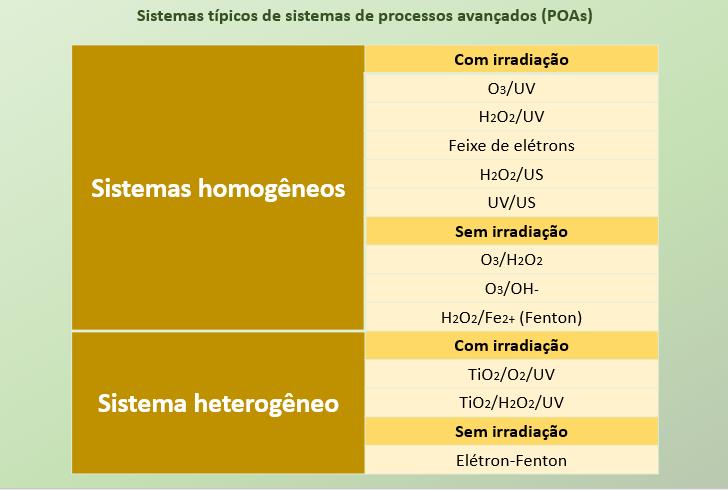 Stabilization ponds are biological treatment systems in which the stabilization of organic matter is carried out by bacteriological oxidation (aerobic oxidation or anaerobic fermentation) and / or photosynthetic reduction of algae.

In general, ponds have excellent treatment efficiencies. In terms of BOD removal efficiency, the typical range is between 75 and 85%. With regard to coliform removal, up to 99.9% efficiency has been achieved.

Pond efficiencies are influenced, in large part, by climate. Locations with predominant warm climate (eg, Brazil) have higher removal efficiencies than cold locations, because temperature has a relationship with other factors that interfere with the biological process, such as solar radiation, photosynthesis velocity and metabolism of organisms.

In addition, it is important to highlight the role of algae in facultative and aerobic lagoons. In these two types of systems, algae are responsible for the delivery of much of the oxygen dissolved in the pond, which will be used by microorganisms to synthesize organic matter.

The main advantages are: high efficiency of removal of BOD and coliforms; reduced operation and maintenance costs; and simplicity of operation.

The main disadvantages are: they require large areas; biological activity affected by temperature; and generation of bad odors (anaerobic processes). 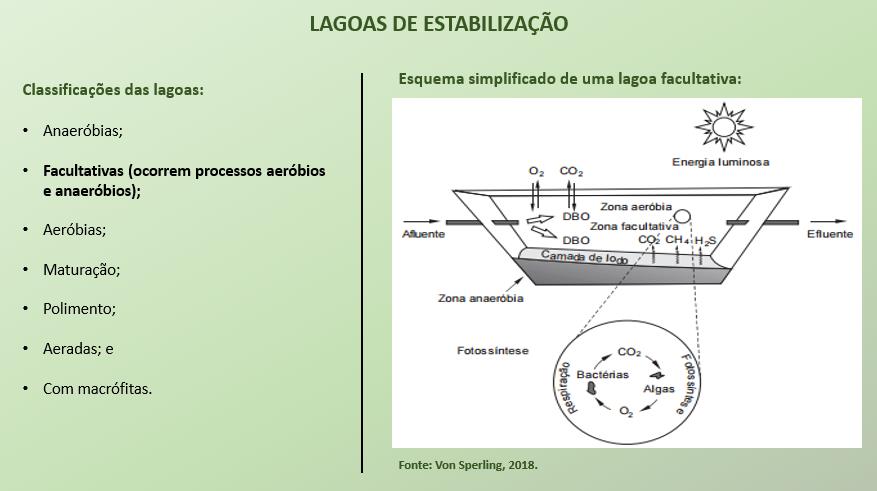 The given name, “Biological Filter”, does not portray the mechanism of the process. In fact, the denomination is incorrectly employed because no sieving or filtration operation is carried out. Briefly, the contact of the influent sewer with the biological mass contained in the Biological Filter carries out a chemical oxidation. The mechanism of the process is characterized by feeding and continuous percolation of the sewage through the support medium, which promotes the growth and adhesion of biological mass on its surface.

Under favorable conditions the biological mass added to the support medium retains the organic matter contained in the sewage through the adsorption. The synthesis of new cells promotes the increase of the biomass damaging the passage of oxygen to the innermost layers, near the surface of the support medium, where the oxidation process is carried out anaerobically. The byproducts of the oxidation of the compounds by the anaerobic and aerobic bacteria are: CO2, HNO3 and H2SO4.

Finally, the accumulated gases produced in the anaerobic layer cause detachment of the aggregated biological mass to the support medium, facilitating its drag through the sewage stream. This material constitutes the sludge, removed by sedimentation in the secondary decanters.

Thermal drying of sludge has been presented as an excellent alternative for the reduction of sludge moisture in TEEs and ETAs. It is a process of reducing humidity through the evaporation of water to the atmosphere with the application of thermal energy, being able to obtain solids contents of the order of 90 to 95%. With this, the final volume of the sludge is reduced significantly.

The development of this technology applied in the treatment of sludge has aroused the interest in the market so that it is possible to dry it in the stage of raw sludge, eliminating the other stages of treatment.

The stage of biological stabilization and sanitization can be excluded from the treatment, as the thermal drying process eliminates the pathogens and stabilizes the sludge through heat. In addition, the final product presents a high content of organic matter and calorific value, which adds value to this and favors the agricultural use.

Through the thermal drying of the sludge the sludge treatment becomes much easier, also significantly reducing transport costs. However, thermal drying is not without problems, it is an expensive alternative and can present problems with the production of odors and dust. 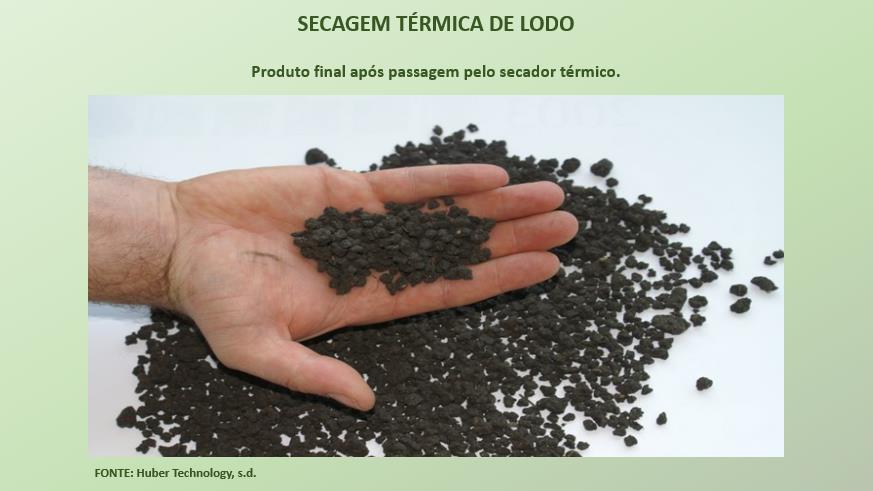 MBR (Membrane Bio Reactor) technology is considered to be the most advanced in the treatment of domestic and industrial effluents. Its application encompasses several situations with a high efficiency of removal of solids and organic matter.

The membranes have micropores that perform an ultrafiltration process, barring any type of solids and bacteria, allowing only the passage of water, some ions and molecules of low molecular weight. This type of process ensures a high quality treated water. In addition to enabling the treatment of industrial effluents for the transformation of reuse water. WHERE ARE THEY INSTALLED?

It is usually used in conjunction with aerobic reactors (activated sludge), for example. By working with high solids concentrations (larger than common biological systems), the MBR can be used in smaller aeration tanks. In addition, the MBR replaces the decanter. Consequently, the total occupied area is smaller. 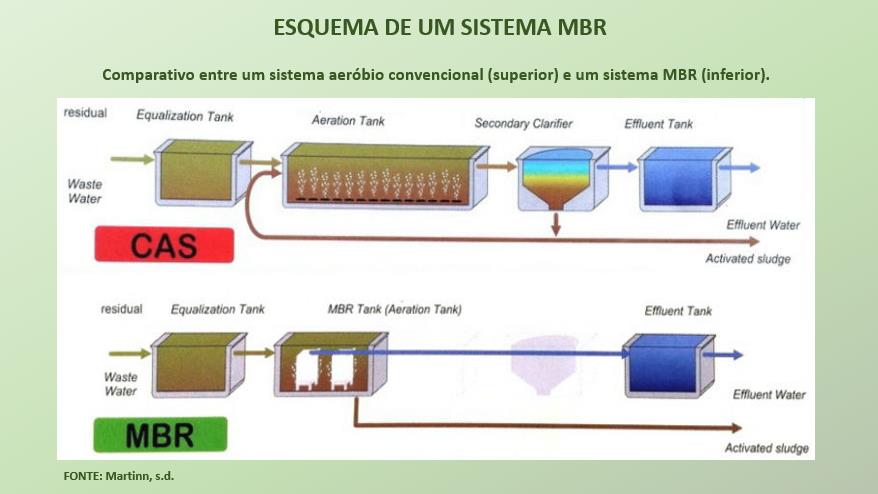 Unlike sludge from wastewater treatment plants (ETEs), sludge from ETAs has larger applications on a daily basis.

This is due to its composition, since the sludge of an ETA hardly presents toxic substances (heavy metals) that harm the environment. Due to urban growth in the world’s major metropolises, demand for water has increased considerably in recent years.

Thus, it is necessary to increase water production in the ETAs, increasing the production of sludge. As a result, several specialists in the area began to find economically viable and environmentally advantageous solutions for the final destination of ETA sludge. Among the various possibilities of use, the following stand out: brick fabrication; cement manufacturing; composting; and disposition in the soil.

It is important to carry out a market research, identifying potential customers; acceptance of the product by manufacturers and the final consumer; and its viability of commercialization.

It is important to mention that environmental legislation should be analyzed for each type of final disposal desired and that the characterization of sludge is of fundamental importance in determining its purpose. 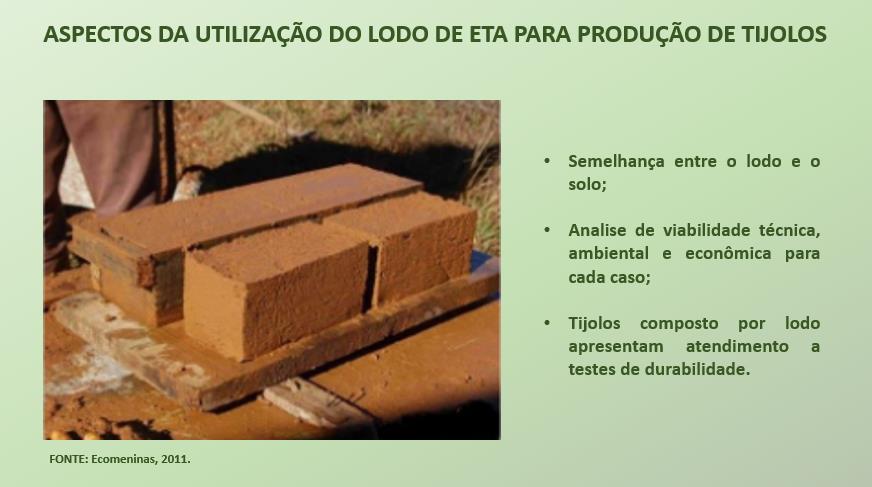 Septic tanks are alternatives in areas (urban and rural) where there is no sanitary sewage service, requiring the implementation of some means of final disposal of treated sewage in order to avoid contamination of soil and water.

In general, the septic tank is a chamber whose purpose is to retain the sanitary sewers for an established period of time, in order to allow the sedimentation of the solids and the retention of the fats contained in the sewage, transforming them biochemically into substances and compounds more simple. The main trench arrangements are: single chamber; and chambers in series.

It is important to note that the septic tank has treatment limitations, since the average efficiency of BOD removal is 30% and suspended solids, 50%. Because of this limitation, the septic tank effluent can be potentially contaminating the soil and water, with unpleasant odor and appearance, requiring, for these reasons, an adequate final disposition. Among the processes adopted for the provisions, the most usual, are: sink; infiltration trench; filter ditch; and sand filter. 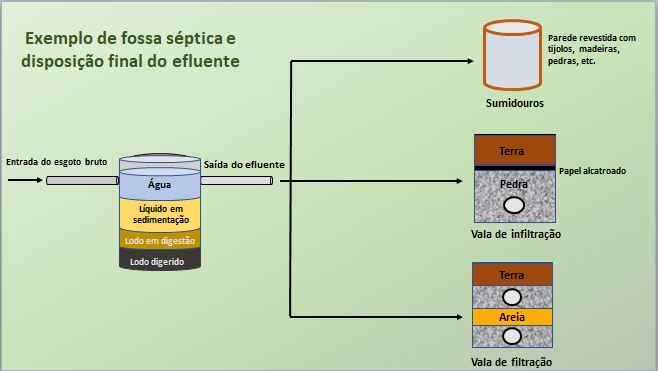 The Wetland system has been presented as an alternative to the biological treatment of sewage. It is a process that uses physical, chemical and biological filtration in the transformation / purification of pollutants present in the sanitary or industrial sewage, degrading organic matter, recycling the nutrients and consequently, improving water quality. This type of system has several advantages, such as: low cost of operation, maintenance, implementation and operation; low energy consumption; and costs with final disposal of the sludge is eliminated.

The uses of Wetlands demonstrate good efficiencies in the removal of suspended solids, BOD and nutrient concentration (Phosphorus and Nitrogen). Removal of organic matter and nutrients within a Wetland filter is due to the use of aquatic macrophytes.

These species are used because they have adaptations to the different types of environments, from swamps to totally submerged environments. Wetlands can be surface or subsurface flow. 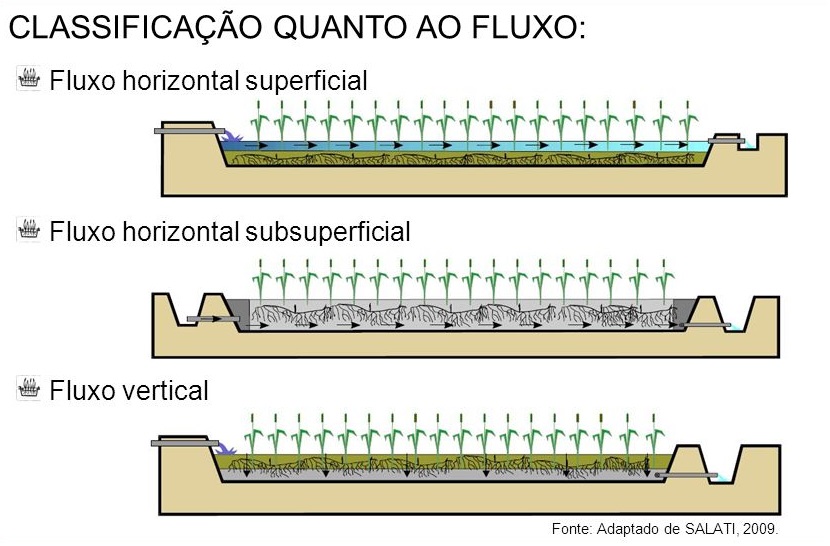 Most of the water and effluent treatment systems currently in place in Brazil require studies of process engineering and the correct selection of quality equipment and materials.

These are the basic conditions that assure customers that their plants operate at their best performance and maximum capacity. In the selection part of the process, there is, in most cases, a correct evaluation of the water or the effluent to be treated, either by the lack of historical data or by the short term for the implementation of the system.

In this way, the data or design criteria are not properly raised and defined, which leads the final customers to acquire solutions that are not indicated to their particular situation. In other cases, clients seek solutions in the market that represent situations similar to yours, abroad or even in Brazil, but that do not consider local specificities, such as production processes, legal requirements, training of labor or appropriate equipment. In some cases a retrofitting or retrofitting can be the definitive solution, with low cost and that meets the requirements of the client. In the manufacturing aspect of the equipment, the following situations occur:

in a highly volatile market, such as sanitation, suppliers propose punctual solutions, without taking into account the needs of the process or because they are unaware of the limitations of their equipment, whether mechanical or hydraulic . The Brazilian sanitation market requires integrated engineering solutions in order to provide treatment plants that operate in the best possible way and for this, there is a need for a joint work of process engineering company and manufacturers. Figures 1 and 2 below show cases of unsuccessful works and well-executed works in conjunction with equipment compatible with the work and of good mechanical quality.

These examples serve to show that there is a very good engineering capacity in Brazil and that it can be used in sanitation works of any size. 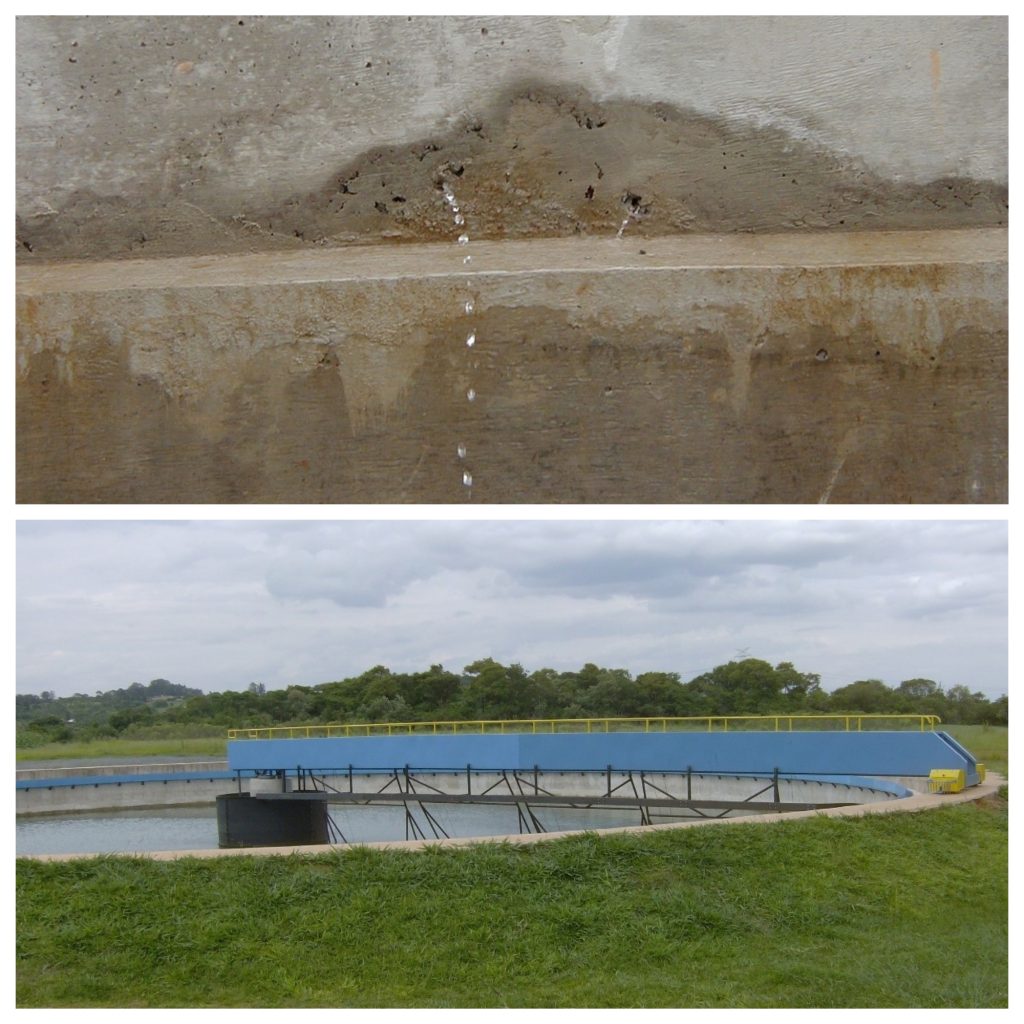 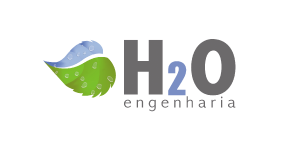